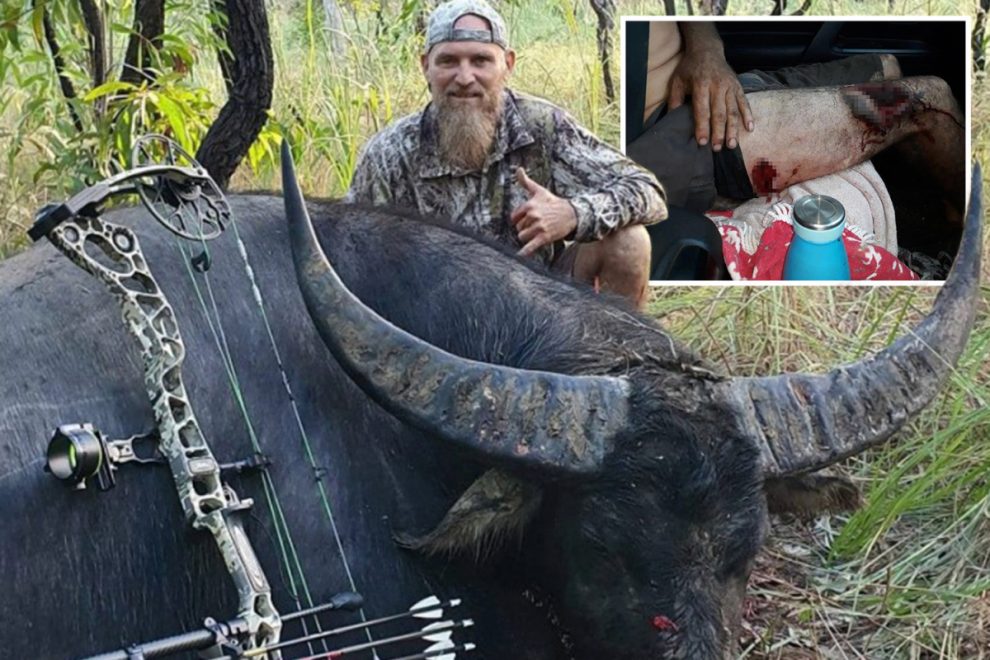 A MASSIVE dying buffalo wreaked their remaining revenge on a hunter in Australia with a brutal assault that left him with horrific leg wounds.

Chris McSherry, 35, was ambushed by the 800kg beast whereas he was out bow looking – and narrowly escaped demise after being thrown 300 ft and gored twice.

The dad-of-five and avid hunter noticed the beast in Port Bradshaw, simply off the northeast coast of the Northern Territory.

He initially thought he had killed the buffalo after firing a number of arrows at it, however it made a sudden dart in direction of him.

Fortunate Chris describes the chilling second that the beast rushed at him throughout its dying moments.

He advised NT Information: “I managed to show and get about three steps in earlier than he was on my again and gored his horns into my higher thigh, pushing me ahead.

“That’s once I hit the bottom and he put the horns into me once more, picked me up by the fitting leg and flung me about three metres.”

The beast then wrestled Chris to the bottom and pinned him down with its horns.

Chris was in a position to make a fortunate escape by rolling away from the buffalo, which died a couple of moments later.

However the assault had left him with severe wounds, and he was rushed to Gove Hospital earlier than being flown to Darwin Hospital for surgical procedure on the horror wounds in his leg.

He mentioned: “The buffalo left me with some first rate wounds, there’s a Coke can-sized gap above the entrance of my knee and an eight-inch gash proper underneath my bum”.

It wasn’t the primary time that he had prevented close to demise in twenty years of looking.

Chris added that he had been charged by a crocodile on a spearfishing journey earlier than.

Home water buffalo are farmed for meat and hides throughout all states in Australia.

It’s estimated there are round 300,000 energetic hunters within the nation, investing a whopping $556,650,000 into the economic system.

The 800kg beast was present in Port Bradshaw, simply off the northeast coast of the Northern Territory [/caption]