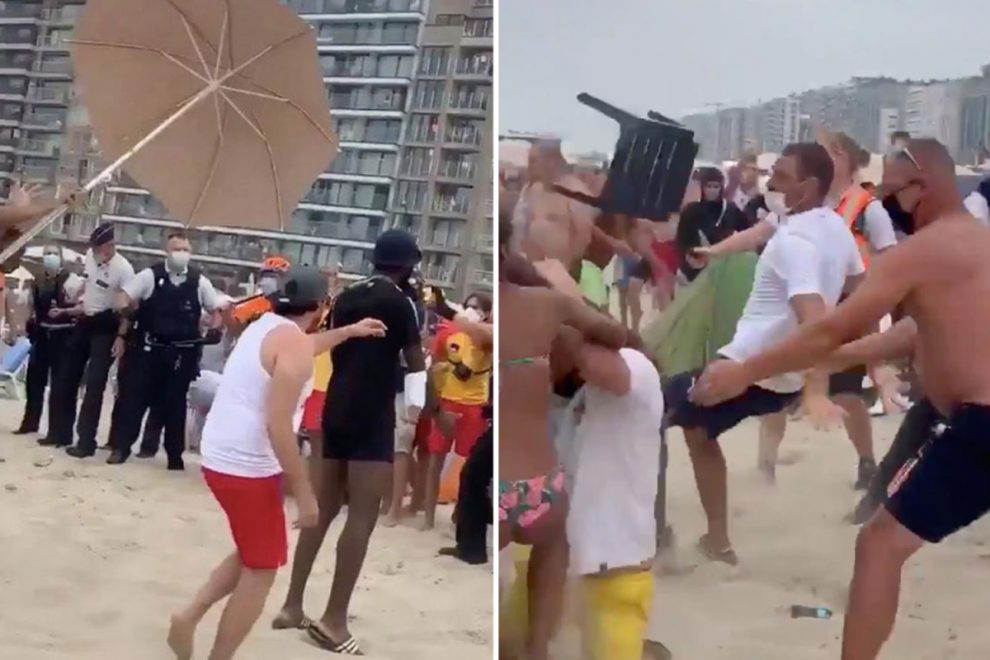 HOT-headed beachgoers battered one another with umbrellas and used windsurfing poles “as weapons” throughout a seashore brawl in Belgium.

The dramatic scenes had been filmed at Blankenberge seashore on Saturday as sunseekers clashed with cops and lifeguards.

One man tried to make use of the umbrella as a weapon, throwing it at a police officer as lifeguards watched on[/caption]

Footage reveals a chair being hurled throughout the sand as sunbathers wildly launch themselves at each other.

One man is filmed utilizing an umbrella as a weapon, throwing it at a police officer as lifeguards watch on.

Others combat amongst themselves, with grown males flying throughout the golden sand.

The combat is claimed to have began when a lifeguard instructed a gaggle of round 40 children that sitting on the breakwater was prohibited.

The group reportedly refused to depart, ensuing within the huge brawl.

Describing the incident, a bar supervisor instructed De Standaard: “There was all of a sudden huge preventing and complete chaos broke out.

“Solar umbrellas and sunbeds flew, windsurfing poles had been used as weapons.”

Sand and different objects had been thrown at officers, as they shielded themselves with batons and face masks.

Cops arrested plenty of individuals concerned, with the city’s mayor condemning their behaviour.


Landlord advertises backyard 'shed' to dwell in for £1,500-a-month


Boy, 8, collapses and dies minutes after telling mum 'I really like you'

Mayor Daphné Dumery mentioned: “I believe that is horrible.

“For individuals who include good intention and need to get pleasure from a day in Blankenberge, that is very dangerous. I consider kids and their mother and father.”

Mayor Dumery requested for all trains to Blackenberge to be cancelled on Sunday, banning day-trippers from the seaside resort.

One man goes flying because the drama unfolds[/caption]

Women and men conflict with cops on the magnificence spot[/caption]

Two males fall to the bottom through the brawl[/caption]

Officers tried to interrupt up the scenes[/caption]